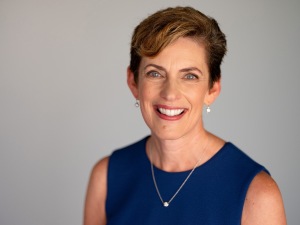 Karen Catlin is a leadership coach and an acclaimed author and speaker on inclusive workplaces. After spending twenty-five years building software products and serving as a vice president of engineering at Macromedia and Adobe, she witnessed a sharp decline in the number of women working in tech. Frustrated but galvanized, she knew it was time to switch gears.

Today, Karen coaches women to be stronger leaders and men to be better allies for members of all underrepresented groups. Her client roster includes Airbnb, DoorDash, eBay, Envoy, Intel, Intuit, and Segment, as well as entrepreneurs and individuals. Karen’s coaching offerings include tactics for increasing visibility, being more strategic, managing stakeholders, negotiation, and cultivating ally skills. Her writing on these and related topics has appeared in Inc., the Daily Beast, Fast Company, and the Muse, and she’s consulted on articles for the Wall Street Journal, Forbes, and the New York Times.

A self-professed public speaking geek, Karen is a highly sought-after and engaging presenter who has delivered talks at hundreds of conferences and corporate events. She speaks on inclusive workplaces and women in leadership. Her TEDx talk, Women in Tech: The Missing Force, explores the decline in gender diversity in tech, why it’s a problem, and what can be done about it. In addition to speaking herself, Karen is determined to change the ratio for who is on stage giving keynotes and other presentations. To support this goal, she coauthored Present! A Techie’s Guide to Public Speaking with Poornima Vijayashanker.

Karen is a graduate and active alum of Brown University, serving as an advisor to the university’s Computer Science Diversity Initiative and mentoring students on how to launch their careers. She’s also a member of the board of directors of Digital NEST and on the advisory boards for the Women’s CLUB of Silicon Valley and WEST (Women Entering & Staying in Technology). In 2015, the California State Assembly honored Karen with the Wonder Women Tech Innovator Award for outstanding achievements in business and technology and for being a role model for women.

Are you looking for a leadership coach who understands what it takes to be successful as a woman in Silicon Valley? Are you a leader who wants to create a more inclusive workplace? Are you seeking an inspirational speaker for your next event? Contact Karen. She looks forward to hearing from you.

As an Amazon Associate, I earn from qualifying purchases.